In honor of the Hubble Telescope’s 30th anniversary of its launch aboard the Space Shuttle Discovery,  NASA has released a stunning new Hubble image of the cosmos. 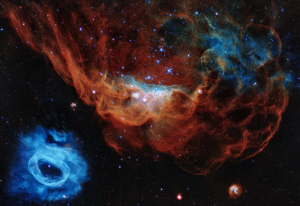 These two images show the star-forming regions surrounding NGC 2014 and NGC 2020.  The box in both images outlines the location of the two nebulas in the Large Magellanic Cloud, a vast stellar breeding ground located 163,000 light-years away.  The visible-light image at top shows brilliant young stars bursting to life within hotter areas of gas.  The bottom image, taken in infrared light, reveals the underlying cooler gas, showing that the star-formation regions are actually connected.

The European Space Agency has additional technical information about the image.

Learn more about the Hubble, its stunning imagery and other groundbreaking data

To learn more about this stunning image, please read the Hubblesite’s press release, “Hubble Marks 30 Years in Space with Tapestry of Blazing Starbirth.”

Enjoy this short video of some of the images that the Hubble Telescope has taken over the past 30 years.

In honor of the 30th anniversary of the Hubble Telescope, enjoy this special short film “Deep Field: The Impossible Magnitude of Our Universe” featuring music by Grammy award-winning composer Eric Whitacre.  The soundtrack to the short film features a new, epic Virtual Choir representing 120 countries: over 8,000 voices alongside the Royal Philharmonic Orchestra and Eric Whitacre Singers.

Kids, help us celebrate Hubble’s 30th Birthday with these space-inspired activities.  Display your creation in a window for neighbors to enjoy, share your creation on social media using the hashtag #Hubble30 and follow the #Hubble30 hashtag to see and share others’ creations.

As we celebrate the Hubble’s 30th birthday, discover what the Hubble observed in space on your birthday.  Share the results with your friends on social media using #Hubble30.

A star map is a map of the night sky.  Astronomers use star maps to identify and locate constellations, stars and galaxies.  Create your own star map, and see if you can spot the new stars that the Hubble took a picture of.

NASA explains that “constellations, or star patterns, help spacecraft navigate outer space.  Most spacecraft have steered by the stars—or at least checked the stars once in a while to make sure the spacecraft was still on course and pointed in the right direction.”  Make your own star finder to see these constellations.