Page Turner Book Club meets the second Thursday of every month from 3:00 to 4:30 pm. Participants discuss the selected ‘title of the month’. Read it in book, ebook, audiobook, eaudiobook, large print, or paperback form. Finish it, or maybe you’ll want to say why you didn’t!  Whether you would give a rave review or not, come share your insights and responses. 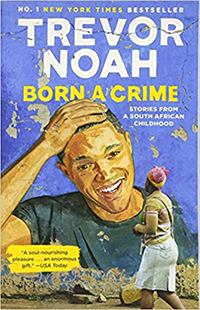 “Trevor Noah’s unlikely path from apartheid South Africa to the desk of The Daily Show began with a criminal act: his birth. Born a Crime is the story of a mischievous young boy who grows into a restless young man as he struggles to find himself in a world where he was never supposed to exist. It is also the story of that young man’s relationship with his fearless, rebellious, and fervently religious mother—his teammate, a woman determined to save her son from the cycle of poverty, violence, and abuse that would ultimately threaten her own life.” — Summary from Barnes & Noble 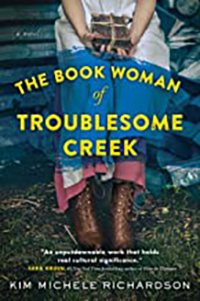 “The hardscrabble folks of Troublesome Creek have to scrap for everything―everything except books, that is. Thanks to Roosevelt’s Kentucky Pack Horse Library Project, Troublesome’s got its very own traveling librarian, Cussy Mary Carter. Cussy’s not only a book woman, however, she’s also the last of her kind, her skin a shade of blue unlike most anyone else. Not everyone is keen on Cussy’s family or the Library Project, and a Blue is often blamed for any whiff of trouble. If Cussy wants to bring the joy of books to the hill folks, she’s going to have to confront prejudice as old as the Appalachias and suspicion as deep as the holler. Inspired by the true blue-skinned people of Kentucky and the brave and dedicated Kentucky Pack Horse library service of the 1930s, The Book Woman of Troublesome Creek is a story of raw courage, fierce strength, and one woman’s belief that books can carry us anywhere―even back home.​” — Summary from Amazon 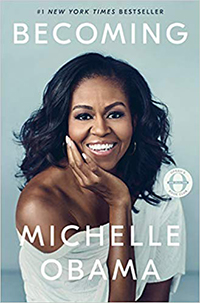 “In her memoir, a work of deep reflection and mesmerizing storytelling, Michelle Obama invites readers into her world, chronicling the experiences that have shaped her—from her childhood on the South Side of Chicago to her years as an executive balancing the demands of motherhood and work, to her time spent at the world’s most famous address. With unerring honesty and lively wit, she describes her triumphs and her disappointments, both public and private, telling her full story as she has lived it—in her own words and on her own terms. Warm, wise, and revelatory, Becoming is the deeply personal reckoning of a woman of soul and substance who has steadily defied expectations—and whose story inspires us to do the same.” — Summary from Amazon 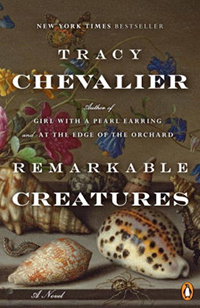 On the windswept, fossil-strewn beaches of the English coast, poor and uneducated Mary Anning learns that she has a unique gift: “the eye” to spot fossils no one else can see. When she uncovers an unusual fossilized skeleton in the cliffs near her home, she sets the religious community on edge, the townspeople to gossip, and the scientific world alight. After enduring bitter cold, thunderstorms, and landslips, her challenges only grow when she falls in love with an impossible man. Mary soon finds an unlikely champion in prickly Elizabeth Philpot, a middle-class spinster who shares her passion for scouring the beaches. Their relationship strikes a delicate balance between fierce loyalty, mutual appreciation, and barely suppressed envy, but ultimately turns out to be their greatest asset. Remarkable Creatures is a stunning historical novel that follows the story of two extraordinary 19th century fossil hunters who changed the scientific world forever.” — Summary from Amazon 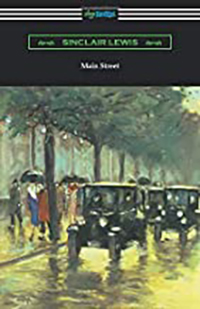 Main Street by Sinclair Lewis
May 14

“First published in 1920, “Main Street” is a biting and satirical look at small town America. Set in the 1910s it follows the struggles of its heroine, Carol Milford, to adapt to small town life.” Summary from — Amazon 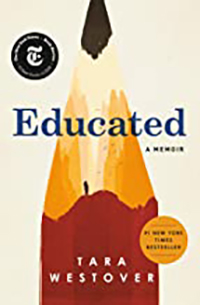 “Born to survivalists in the mountains of Idaho, Tara Westover was seventeen the first time she set foot in a classroom. Her family was so isolated from mainstream society that there was no one to ensure the children received an education, and no one to intervene when one of Tara’s older brothers became violent. When another brother got himself into college, Tara decided to try a new kind of life. Her quest for knowledge transformed her, taking her over oceans and across continents, to Harvard and to Cambridge University. Only then would she wonder if she’d traveled too far, if there was still a way home.” — Summary from Amazon 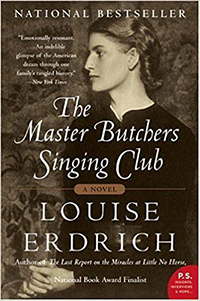 “From National Book Award-winning, New York Times-bestselling author Louise Erdrich, a profound and enchanting new novel: a richly imagined world ‘where butchers sing like angels.’  Having survived World War I, Fidelis Waldvogel returns to his quiet German village and marries the pregnant widow of his best friend, killed in action. With a suitcase full of sausages and a master butcher’s precious knife set, Fidelis sets out for America. In Argus, North Dakota, he builds a business, a home for his family—which includes Eva and four sons—and a singing club consisting of the best voices in town. When the Old World meets the New—in the person of Delphine Watzka—the great adventure of Fidelis’s life begins. Delphine meets Eva and is enchanted. She meets Fidelis, and the ground trembles. These momentous encounters will determine the course of Delphine’s life, and the trajectory of this brilliant novel.” –Summary from Amazon 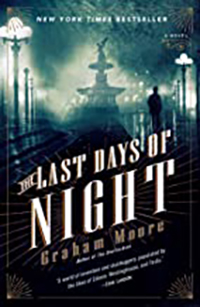 “From Graham Moore, the Oscar-winning screenwriter of The Imitation Game and New York Times bestselling author of The Sherlockian, comes a thrilling novel—based on actual events—about the nature of genius, the cost of ambition, and the battle to electrify America.  New York, 1888. Gas lamps still flicker in the city streets, but the miracle of electric light is in its infancy. The person who controls the means to turn night into day will make history—and a vast fortune. A young untested lawyer named Paul Cravath, fresh out of Columbia Law School, takes a case that seems impossible to win. Paul’s client, George Westinghouse, has been sued by Thomas Edison over a billion-dollar question: Who invented the light bulb and holds the right to power the country.” — Summary from Amazon

The Readers of Broken Wheel Recommend by Katarina Bivald
September 10

“Broken Wheel, Iowa has never seen anyone like Sara: Sara traveled all the way from Sweden just to meet her book-loving pen pal Amy, but when she arrives she finds Amy’s funeral guests just leaving. The residents of Broken Wheel are happy to look after their bewildered visitor―there’s not much else to do in a dying small town that’s almost beyond repair. You certainly wouldn’t open a bookstore. And definitely not with Sara the tourist in charge. You’d need a vacant storefront (Main Street is full of them), books (Amy’s house is full of them), and…customers. The bookstore might be a little quirky. Then again, so is Sara. But Broken Wheel’s own story might be more eccentric and surprising than she thought.​” — Summary from Amazon 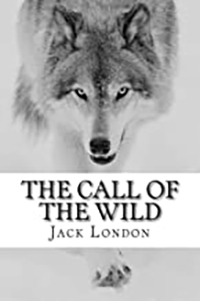 Call of the Wild by Jack London
October 8

“The Call of the Wild is a novel by Jack London published in 1903. The story is set in the Yukon during the 1890s Klondike Gold Rush—a period when strong sled dogs were in high demand. The novel’s central character is a dog named Buck, a domesticated dog living at a ranch in the Santa Clara valley of California as the story opens. Stolen from his home and sold into the brutal existence of an Alaskan sled dog, he reverts to atavistic traits. Buck is forced to adjust to, and survive, cruel treatments and fight to dominate other dogs in a harsh climate. Eventually he sheds the veneer of civilization, relying on primordial instincts and lessons he learns, to emerge as a leader in the wild.” — Summary from Amazon 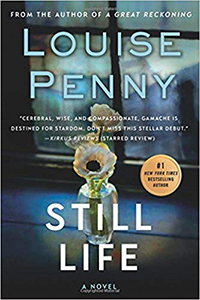 “In the first book, Still Life, “Chief Inspector Armand Gamache of the Surêté du Québec and his team of investigators are called in to the scene of a suspicious death in a rural village south of Montreal. Jane Neal, a local fixture in the tiny hamlet of Three Pines, just north of the U.S. border, has been found dead in the woods. The locals are certain it’s a tragic hunting accident and nothing more, but Gamache smells something foul in these remote woods, and is soon certain that Jane Neal died at the hands of someone much more sinister than a careless bowhunter.” — Summary from Amazon 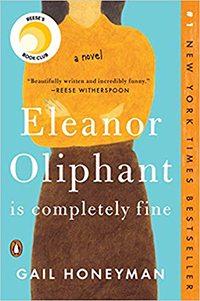 “No one’s ever told Eleanor  that life should be better than fine.”  Meet Eleanor Oliphant: She struggles with appropriate social skills and tends to say exactly what she’s thinking. Nothing is missing in her carefully timetabled life of avoiding social interactions, where weekends are punctuated by frozen pizza, vodka, and phone chats with Mummy.” — Summary from Amazon